But just as I stare outside my window, hear the birds chirping, taking the first sip of self-made tea, a huge bunch of press and media-persons are waiting. Jaise mujhe noch noch ke khaa jaayenge. Aa teri toh..

One of the press-media person shouts from below. 'Kya bola, Kya bola be tu...I don't remember the last time I had a cup of tea in my hand huh? aur aage kya bola....'and stared outside my ...kya...top floor window. aah?  Now that's a controversial statement son'

Hello..listen listen..please let me explain ...hello..yes..I am replying. PLEASSE!
Now silence, the video cameras still rolling.
'I dont know how busy is being busy. But the idea of not able to get a proper sleep is what I think being busy is...where the mind doesnt stop. Now how cruel that can be to someone. And it is this state that wont allow you to indulge in pure pleasures like blog writing. Even if you do write, it will be for the movies that you want to write and why give away a nice idea just like that on blog. On hearing this a press-media person does a Gabbar Singh:
'Haak Thoooo...'

I continue to explain.
But today I got that 12 hours of sleep without even waking up once in between. Now that's an achievement.
The press goes wild, dont know why...maybe on hearing the word 'achievement'. Do hell with what it measures to, but word mein dumm hai: 'Achievement'. Lets start taking photographs on seeing that elusive smile. Must be some great achievement. Press 1 whispers in Press 2's ears: 'He said sleeping 12 hours as an achievement'. The Press 2 guy realizes, tells his photographer: abbey ruk jaa yaar. The Gabbar singh of them doesnt even bother to click. Still keeps staring. As if more garbage is going to come out of my mouth.

Yes, I wake up in the morning and rush to work, not necessarily I have to get out of my home to work always. Sometimes going from my bed to the table is going to work. A distance of 0.5 meters.

And at times work is - cutting across all the geography of the city by the sea. But making sure, you see the sea once. Otherwise there is no point in being in this city. Might as well slog somewhere in North and drive a car and be confident of yourself even when you dont need to be. Work in this city also means - often meeting my most favourite friend -local trains, jumping Best Buses and haggling with the conductor for change, also not to forget - pleading the Auto-wallahs - 'bhai saab ghar chhod do...biwi meri intezaar kar rahi hogi...'

But hey I am not that busy. I do not forget to check facebook. I keep in touch with friends. I wish them on their birthdays.
The press is impressed. Stunned Silence. Murmurs. 'wow he checks facebook too'.
'Baijuu bhaiyaa ki Jaiiiiii'

Gabbar Singh of them responds: 'Ehsaan kar diya duniya pe...Going back to your first statement. Actually I don't remember the last time I had a cup of tea in my hand and stared outside my top floor window. Top floor window..uh? See tu apne baare mein jhaad raha hai..top floor window....??

Thats the problem, do saal pehle ki duniya mein hum blog likhte, apna opinion, apni bhadaas, apni bakwaas nikaal dete thhe, toh chal jaata tha. Ab kuch bhi bolne, likhne pe do baar sochna pad raha hai. Chal haan bola Top floor...Yes, top floor, a building without a lift and a top floor...now that's a smart decision. Samjha? It keeps you healthy, wealthy and wise. (wealthy..how? Because a top floor in a without lift building in this city allows you to stay in the area where you want to and within the budget that you can afford...so bring on...that wind that comes the sea and touches you first. Ab chaahe kitni bhi garmi kyun na ho...lad lenge...

Will soon start posting some more serious stuff. (but hey this was serious too). I guess the smaller ideas from facebook and twitter have to make way to the blog now.

For people who want to know what that Daru song was:


And now hear the following two songs and make your guess easy. The taps come from this song from Armaan.

Oh there is one more reference to Aarakshan's 'Achcha Lagta hai...' Come on Prasoon Joshi you couldn't come up with at least a new words. 'Wohi ka wohi...'Achchi lagti ho...'

shankar-ji, public memory is not so short. At least your fans wont forget your created works so easily or wait a second, did you think that even your fans wont remember your made songs, so seedhe point pe aao and lift your own songs and as such Prakash Jha kaunsa apna regular hai...Apni achchi tunes toh Dharma aur Excel ke liye rakhhi hai na...

And there is more...hear the Pandit Channulal Mishra song 'Saans Albeli' and then hear Ustad Bade Ghulam Ali Khan saab's 'Bhor Bhaye' from Delhi 6. This time is not a rehash. Delhi 6 was AR Rahman or if I am mistaking here, please make me understand if there is a connect of the same raga or the same family of ragas making it to make me feel the same kind of classical feel.
Posted by hardik mehta at 6:17 AM 4 comments: 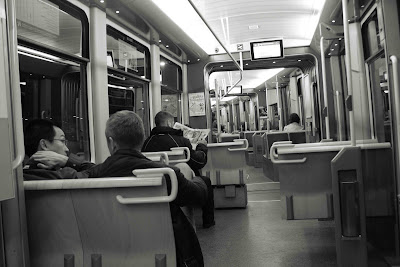 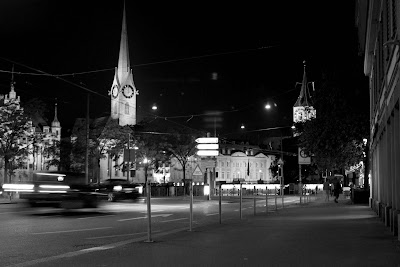 The final moments of the rush hour, when visitors can step on the roads and shout in their respective languages and the Zurich citizens wont give a fiddlers fart to them..! I loved shouting in faux German here... 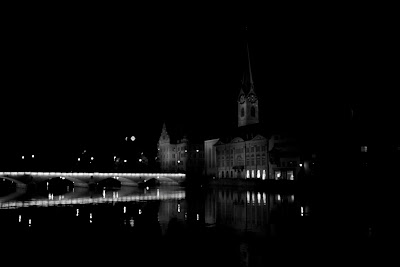 The bridge across River Limmat. 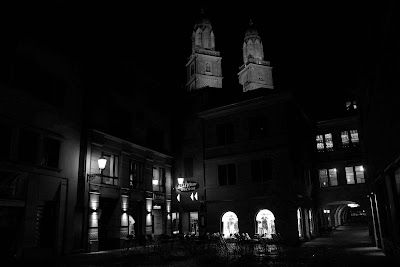 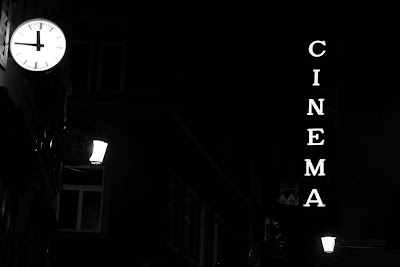 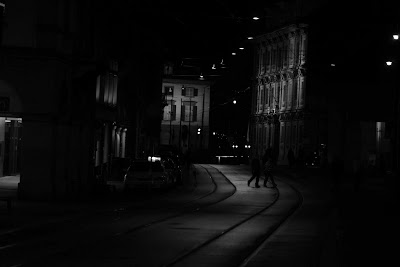 The last night at Zurich. The most memorable one. 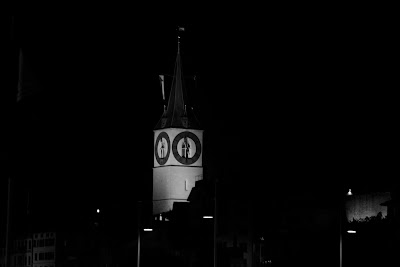 A Black and White Perspective through the Moving Train

Since now most of you know about Bhaand Master's fascination for Indian Railways and the work that resulted in. Here is a sneak peak of some black and white pictures that I could chance my hands upon while standing at the door of a moving train. 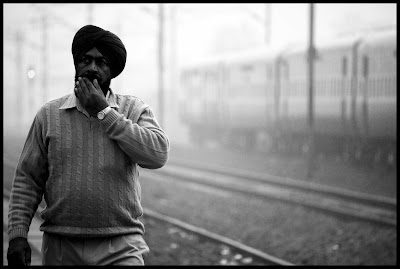 In villages or the smallest of the towns in India, the most happening place after the market or cinema hall is the Railway Platform. Here a Sardar uses his village railway platform for his morning walk. 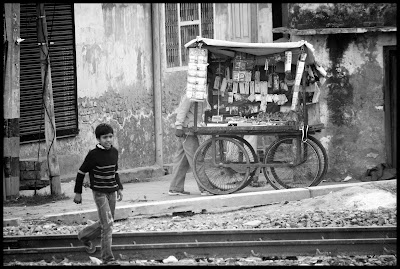 Living next to the Railway Tracks in India is very common. Regular businesses go by as the trains pass by. Here a young boy crosses the tracks to join his friends on the other side. 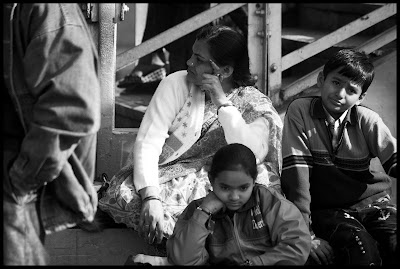 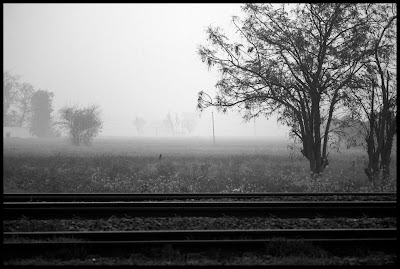 The beautiful countryside that one is often treated to, while traveling through Indian Railways. 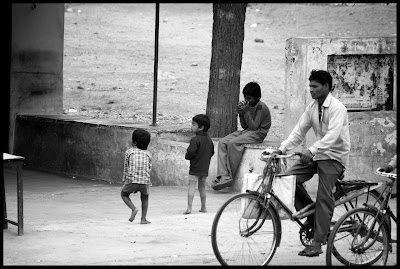 Four different age groups captured together in one frame through a moving train. Something that I feel how the stages of a growing boy in a village would be.

Advertisements about curing impotency, increasing virility and the talented hakims & saints who could cure these ailments are rampant on the bricked walls in Northern India. And the most prominent belt for these advertisements are Etawah-Agra-Mathura-Ghaziabad. 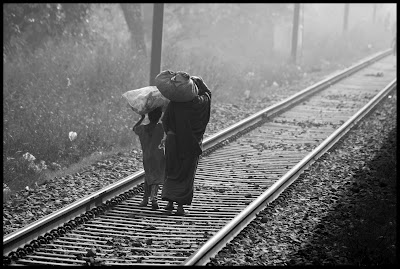 Migration. In the biting cold of a winter morning, a mother and a daughter walk by the railway track with all their belongings. 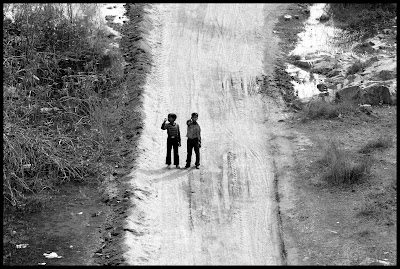 A Train passing through a small village is almost an event that the kids wait for. Here two young boys cheer from under a bridge as a speeding train passes. 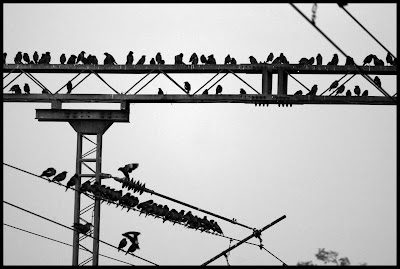 Like people, birds too are no different when it comes to meeting near the Railway Station on evenings.

My Movies, Videos and Photography